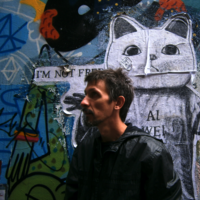 We first became aquainted with Vincent Houzé through the very compelling and often amusing videos he shares of his artistic and R&D experiments. Above: My first steps with Arduino and a little proof of concept.

Vincent Houzé on Rapid-Prototyping and Working in Real Time

The 3-day Norway 2016 Workshop took place as part of Projection Week 2016 at Smart Simulation in Halden.

Last week I had a little time to explore some concepts similar to reaction diffusion. The exploration often yielded some wonderful feedback patterns that to me are reminiscent of the visual stimuli I used to experience more frequently as a child when closing my eyes.