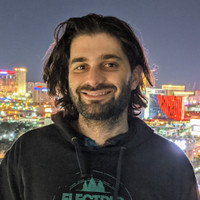 My course on Volumetrics in TouchDesigner is now live over at the NODE Institute. It's goal is to walk you through the entire process of building a raymarched volumetric system on top of the pre-existing lighting system in Touch. This makes for very nice looking renders whos pbr lighting feels very connected to the volumetrics, since they use the same calculations under the hood.

We spend some time in the first half of the course going over some important topics surrounding realistic pbr render pipelines, things that are often missed or neglected which can impact visual quality. Then in the second half of the course we really get into the nuts and bolts, and write our raymarch shader from scratch.

In the tutorial we recreate the statue scene pictured in the first three images below, however you can see from the last two photos the versatility of volumetrics in a wide range of applications. It's biggest source of usefulness besides giving you nice looking 3d cones of light, is that your scenes will have much more depth, things in the background will be tinted differently than foreground, an effect our eyes are used to processing in real life.