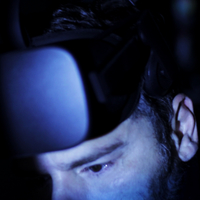 "Trumptard" is a hybrid New Media Art work based on Live Visuals. The aim of the project is to create Generative art Images, in real time, with various techniques and Artistic Mediums, such as Generative Art, Music Visualization, Virtual Reality, 3D cameras, digital and analogue synthesizers and data / midi controllers. The art work in its final form is presented as live audiovisual performances.

The artwork is an artistic synthesis of audio and image elements, that are semi-automatically produced, in the sense that the result is achieved by both the computer and the artist who sets up the mechanism and dynamically triggers a change. The scope of the project is: Real-time animation and generative images to be influenced by the artist-performer's interaction through various devices.

The artistic research of the project is to produce audiovisual performances within the context of expanded cinema, based on Generative Art. It focuses on dialogue and the two-way relationship of live sound to image. Live electronic sound, is also important in the narrative structure of the work, as a music visualization, as it struggles to change and transform the image and it is thus unpredictable, even to the artist himself. The "musical narrative", however, focuses on the rhythm and deformation of the geometric structures. The performer explores forms and shapes, setting up and controlling a complex system and making simultaneous choices.

The artistic research of "Trumptard" is done on the interaction of shapes and forms with analogous "color" qualities of live sounds (timbre of sound), that change over time.  Theoretically, infinitely different live versions of the same artwork could be produced. The work, in its structure, is chaotic, unpredictable and it is never the same. It has a linear form in its conception and a dynamic form in its execution.This is due to the performer himself discovering