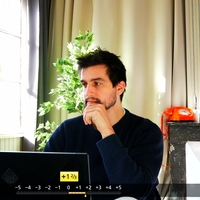 Recently created Les Fantômes based in France just released a new creative kit that allows participants to quickly craft their own animated character away from the computer screen. Move, Print, Draw, and Scan to see the result right before your eyes, a minimalist energetic "Fantôme" made of light out of your own body.
TouchDesigner has been a natural goto tool for this prototype for many reasons.
https://youtu.be/CFPtItEKURA
false

Origin of the idea

Back in 2018, Philippe Dubost, Co-Founder of Les Fantômes, started experimenting by rotoscoping the talents of the Montreal skateboard scene. Between projection and in Camera experiments, the happy looping characters that came out of the animation process took another dimension when combined with the real world.
All of a sudden, the energy of the athletes could replay infinitely in the streets, at impossible scales, on top of mountains, and travel around the world.
- The very first experiments 2 years ago
- Annie Guglia, French-Canadian Skater preparing for the Olympics
- Experiment drawing skateparks on a whiteboard
- Fantoms in Tokyo

Hide the tech, Focus on the craft

After some complicated prototypes with computers/webcams/buttons/topview cameras etc. it felt really natural to turn towards a tablet that holds all the necessary technology for the first Movement Capture part.
Les Fantômes tried to outsource app development but it quickly proved to be way too heavy and complicated to move forward. In the end, a Surface Pro running TouchDesigner was much easier to play with and iterate.

Next steps and opportunities

Currently experimenting the kit with different groups, Studio Fantômes is planning to bring light, movement and positive energy to many cities across France and Europe in the near future.

Fantômaton is one piece of the puzzle. The idea is really to spread the concept on the cities' facades and bring the audience at the heart of their own handcrafted lightshows.