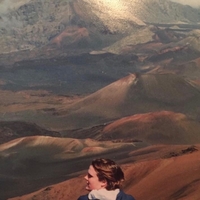 Made in TouchDesigner 099 using two containers both using a torus with a particle SOP in a render pipeline along with a series of lfo chops that have differing frequencies to control the camera position, lighting colours and phong texture colors on a changing constant background.  The project was then reduced to generate at 4fps which went at a nice pace for the music.  These two containers are difference composited using different blur amounts and fed into a Timebase which is adding a mastered wav file to the video and outputting from the computer to a Atomos Ninja to record the AV in HD broadcast format which was encoded into the video you see here.  This is the first track to have a video made for it of my first 14 track album Study Break, with the original album art also created in TouchDesigner 077 inspiring the ideas and looks for the videos.  More fun to come, enjoy! theRob