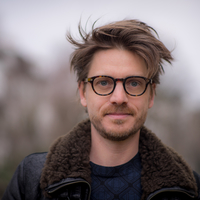 stephanebissieres
Stéphane Bissières is French composer and New Media artist. ​His creation is a reflection on our relationship to technology and on the forms of hybridization of the living. His sound or kinetic creations explore the repetition of the motif to influence the perception of time and space. He draws inspiration from mathematical models and the observation of their expressions in nature. He transposes musical writing mechanisms to his kinetic creations by considering this writing in the form of algorithms rather than scores. He thus develops a generative approach to explore the notion of artificial life by building dynamic systems capable of generating infinite variations with a recognizable common character, such as a genetic code. He exhibits (among others) at the Museum of Contemporary Art in Shenzhen, at the Nuit Blanche in Paris, during the Némo Biennale at 104 in Paris, etc.
Gallery

Here is an installation I made with TD to control black matter (ferrofluid :)

** It is showing now at Le CENTQUATRE-Paris, France, for biennale Nemo **