The Timer CHOP is an engine for running timed processes. It outputs channels such as timing fractions, counters, pulses and timer states, and it calls python functions (callbacks) when various timing events occur.

You set a timer to a number of seconds, frames or samples, and trigger it to start via the Start parameter or the second input CHOP. The Timer CHOP outputs in seconds, frames, samples, fraction and on-off states as it’s counting, including a done channel that goes on when it is complete. When it reaches certain states like end-of-cycles or when it’s done, various python callbacks are called allowing you to customize its behavior.

The Timer CHOP gets triggered by events (via pulsing its parameters or driving its two inputs). It takes events in, counts time, changes state. Via its python callback functions, you can send events out to other nodes, set parameters, get/set values in DATs, CHOPs and storage, restart itself, or trigger other nodes. As such, it can operate as a state machine.

It has play/pause, plus a speed control to slow down or speed up the timer.

It can also cycle indefinitely and then can be signaled to end immediately or at the end of the current cycle.

One Timer CHOP can also have multiple timers within it. By attaching a Table DAT you can define one timer (segment) per row. In Serial Timers mode it allows for one time segment followed by another. In Parallel Timers mode, the timers all run in parallel, each with its own begin time and length, and its own set of output channels. 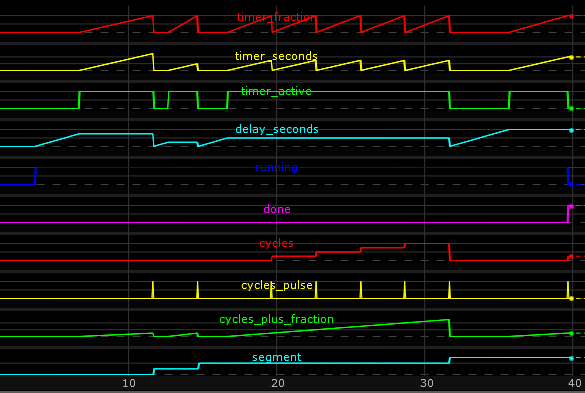 The Timer CHOP can be Locked to Timeline in a deterministic way, or run more freely in Sequential Mode. When run independently from the timeline, you can jump ahead, break out of cycles, pause, goTo() exact position or timecode in the timer, and dynamically adjust the speed.

Before a cycle or segment ends, an onCycleEndAlert() callback based on the Cycle End Alert parameter can be called to allow you to prepare for the next cycle, segment or Timer CHOP.

Attach an Info DAT to see the timecodes, or use the .timecode members. Custom text strings can be placed in the Info DAT for each segment, and custom animated channels can be created.

To make the entire CHOP loop after the last segment, set the On Done menu to Re-Start.

Active active - While On, the CHOP operates normally. While Off, no updating occurs.

Initialize initialize - (pulse parameter) Initialize is the signal to get the timer ready: sets the counters to zero (delay, timer, cycle, segment), set the output channels in the proper state, done to be off, the onInitialize() callback is run, and when initialize is complete, it indicates it’s ready by turning on the ready channel, awaiting a Start pulse.

Start start - (pulse) Start is the signal to commence the timers counting. It will count through the delay first, then the timer length. It does an Initialize if it is not already initialized, and then starts counting.

Length Type lengthtype - ⊞ - Describes how the length is defined.

Length length - (float) the time-length of the timer. Set the Units menu to Seconds, Frames or Samples.

Length Units lengthunits - ⊞ - Choose between using Samples, Frames, or Seconds as the units for this parameter.

Delay delay - (float) after Start, the delay before the timer begins counting.

Delay Units delayunits - ⊞ - Choose between using Samples, Frames, or Seconds as the units for this parameter.

Play play - (onoff) Pauses the timer. It is basically a 0 or 1 multiplier on the Speed.

Speed speed - (default 1) Slows down or speeds up the timer.

Cue Point cuepoint - Time (Seconds, Frames or Fraction) which the cue point is frozen to.

Cycle cycle - (default Off) causes the timer to loop back to 0 when it reaches the end of the cycle.

Cycle Limit cyclelimit - When the Cycle parameter is On, this determines if it will cycle indefinitely or cycle some maximum number of cycles.

Maximum Cycles maxcycles - When Cycle is on and Cycle Limit is on, this sets the maximum number of cycles.

Cycle End Alert cycleendalert - The number of seconds, frames or samples before a cycle, segment or done state is reached that the onCycleEndAlert() callback is called. This allows you to prepare for the next cycle, segment or timer.

Notify Units notifyunits - ⊞ - Choose between using Samples, Frames, or Seconds as the units for this parameter.

Exit Segment at End of Cycle exitendcycle - When pulsed, it will exit the cycle (and segment) at the end of the currently-playing cycle.

Go to End of Cycle gotoendcycle - When pulsed, it will exit the cycle (and segment) immediately.

Go to Done gotodone - Will immediately go to the Done state.

On Done ondone - ⊞ - Determines which action to take when the timer gets to the end, ie "is done" or finished. Note there is also a onDone callback that can be used for customizing behavior.

Callbacks DAT callbacks - The path to the DAT containing callbacks for this Timer CHOP.

You can specify multiple timers in one Timer CHOP. A "segment" acts as one timer, with its own length, delay time, number of cycles to repeat and other conditions.

Segments DAT segdat - A table DAT that contains one row per timer (segment). The column headings can be delay or begin, length, cycle, cyclelimit, maxcycles and cycleendalert, which override the equivalent parameters. (These are the internal names for the corresponding parameters.) begin is unique as it replaces delay, and it represents the time from Start that the timer will begin counting, whether the CHOP is set to Serial Timers or Parallel Timers (see Segment Method).

The Segments DAT also can include any number of custom columns. See Columns to Custom Channels and Columns to Info DAT below.

Segment Units segunits - ⊞ - For the columns delay, begin, length and cycleendalert, you specify whether it’s seconds, frames or samples with this menu.

Columns to Custom Channels channelcolumns - Optional extra columns (any name) in the segments DAT can be output as extra channels (the columns must contain numbers). Specify their names in the Columns to Channels parameter. The channel name will be the column name. You can also output the length, delay, etc columns as channels.

Custom Channel Interpolation interpolation - ⊞ - By default, custom channels step to their new value at the begin of the segment. This menu lets you interpolate to the new value linearly, or any combination of ease-in and ease-out.

Columns to Info DAT infocolumns - Optional extra columns (any name) in the segments DAT can be output to the Info DAT (attach an Info DAT to the Timer CHOP) if you specify their names in this parameter.

Operate the timer within a sub range of the total length.

Sub Range subrange - Turn this parameter on to limit the timer output to a subrange of the full length.

Sub Start substart - The beginning point of the sub range.

Sub Start Units substartunits - ⊞ - Choose between using Samples, Frames, or Seconds as the units for this parameter.

Sub End subend - The end point of the sub range.

Sub End Units subendunits - ⊞ - Choose between using Samples, Frames, or Seconds as the units for this parameter.

Timer Active outtimeractive - Outputs channel timer_active which is on only while the timer fraction is counting (is non-zero).

Delay Fraction outdelayfraction - Outputs a 0-1 fraction in delay_fraction while the delay occurs.

Ready outready - Outputs channel ready which is 1 after an Initialize and before a Start.

Running outrunning - Outputs channel running which is 1 after a Start and before the Done.

Done Pulse outdonepulse - Outputs channel done when the all timers have reached their completion.

Cycles outcycle - Outputs channel cycles, which is the number of cycles completed (In a segment), starting with 0 during the entire first cycle. If you jump to Done, cycle is incremented as if it played normally to the done state.

Cycle Pulse outcyclepulse - Outputs a pulse at the end of every cycle, even on the first and only cycle.

Segment Pulse outsegpulse - Outputs channel segment_pulse which is a pulse at the end of each segment.

Cumulative Timer Count outcumulativecount - ⊞ - Outputs cumulative_seconds, cumulative_frames or cumulative_samples. It is a time count that adds up all the Timer Active times for all segments since Start: it is affected by "Speed", and counts up only while timer_active is on.

Playing Timer Count outplayingcount - ⊞ - Outputs playing_seconds, playing_frames or playing_samples. It is a time count that adds up all the Timer Active times for all segments since Start: it is not affected by "Speed", and counts up only while timer_active and play is on.

Running Time Count outrunningcount - ⊞ - Outputs the "wall-clock" time since Start occurred, no matter what are the delays, speeds, cycles or pre-mature clicking of Go To Segment End, etc. It stops counting when Done has been reached. running_seconds, running_frames, or running_samples. When CHOP is set to Parallel Timers, this will output a channel per segment plus one global running time channel.

Master Time Count outmastercount - ⊞ - Outputs master_seconds, master_frames or master_samples. It is a time count that adds up all the Timer Active times for all segments since Start: it is affected by "Speed", and counts up only while timer_active and play is on. It also includes any delay times.

External CHOP extchop - The CHOP used to control the current point in the timer.

External Units extunits - ⊞ - Choose between using Samples, Frames, or Seconds as the units for this parameter.

External Channel extchannel - The channel that will control the current point of the timer.

Sample Rate rate - The sample rate that the CHOP outputs at, which is also used when the units of Length, Delay and Cycle End Alert time are set to Samples. The default sample rate is 60 samples per second.

Extra Information for the Timer CHOP can be accessed via an Info CHOP.