The Textport is the dialog box in which commands and scripts can typed in manually. Output to the textport includes script errors and messages from print() and debug() calls in python code. You can also edit DATs in the textport.

Dialogs -> Textport brings up the main textport, but you can also press F4 to open the Textport as a floating window. F4 will also work in Perform Mode.

You can type python expressions and get them evaluated, as simple as 2+3, which prints 5 on the next line.

Tip: If you mis-type a line and press Enter, to edit it you can press the up-arrow to get the last lines you typed, and you can edit them with arrow/backspace/delete characters, then press Enter to re-execute it.

If you are writing an expression like op('/project1/geo1').par.tx, you can more easily type op(', then drag the node to the textport (which adds its path to the string), and then type ').par.tx and Enter: It will do the same thing.

Note that some startup and system errors are output to Dialogs -> Console.

You can put textports in panes by setting the Pane Type menu to Textport and DATs.

There are two scripting languages in TouchDesigner: Python and the obsolete Tscript. For Tscript, all commands are described in Tscript Commands and Tscript Expressions, and its scripting syntax is found in Tscript. textport is a Tscript command that can be used to manipulate the contents of the dialog.

You can redirect Python stdout and stderr to any DAT. Then you can use the OP Viewer TOP or COMP to convert that DAT into a texture and integrate it into your UI.

The textport can be opened from the Dialogs menu or by using the Alt+Shift+T keyboard shortcut. Textport can also be opened as a Pane.

The simplest method to input Python scripts is through the textport. The textport, like all scripting in TouchDesigner, allows scripts to be specified in either Python or Tscript.

After opening the textport, make sure it is set to Python language. This is controlled by the small toggle button in the upper left side of the textport.

In addition the textport prompt and text color have different values for each language, making it easier to identify which state the textport is in:

Text DAT contents can be edited directly in the textport as well. Dragging a Text DAT onto the Textport will give you the following options:

Additionally, any selected text can be dragged onto the Textport from anywhere on the interface.

When working with DATs in the textport, a history of viewed DATs will be available on the right side of the Textport header.

Tips for Working in the Textportedit

In the textport, you can enter help for a list of available commands or help(object) for any python object, like help(op('/project1').par.x).

Script errors and messages from print() commands are also output to this dialog box.

The main textport also receives the error messages and print() commands from all scripts that are run in DATs.

However startup and system errors are output to Dialogs -> Console.

As a simple test type the following into the textport:

This will output all help related to the op() method found in the td Module.

Script errors and messages from echo commands are also output to this dialog box.

The main textport also receives the error messages and echo commands from all scripts that are run in DATs.

However startup and system errors are output to Dialogs -> Console. 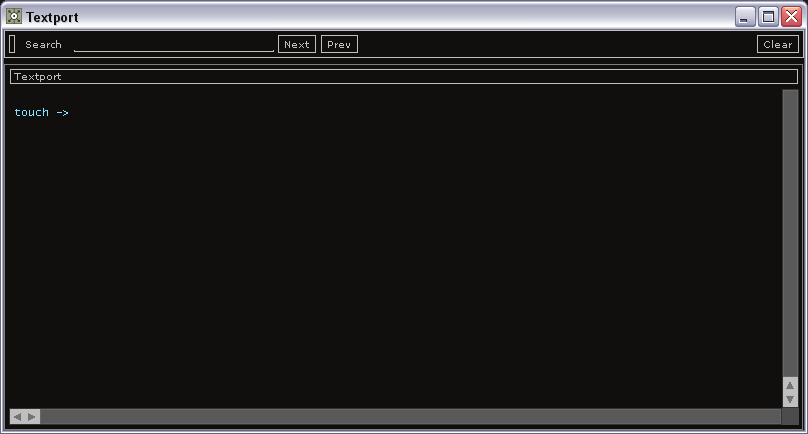 The textport command is used to manipulate the Textport dialog. One of the advantages of using textport is the ability to load DATs without having to navigate to them through the Network pane. For example, to load a DAT in a floating Textport, the following code can be used:

This can be particularly useful while debugging scripts or monitoring network performance.