The WebRTC COMP is a component that can be used to initiate real-time communications (RTC) between TouchDesigner instances and TouchDesigner or WebRTC compatible devices such as most Web browser capable devices, including some IoT devices.

It requires a signalingClient COMP connected to a supported signaling server.

Before getting started with WebRTC, it is highly recommended to give a read to the introduction available on MDN Web Docs.

Reading this doc will help you get familiar with some of the vocabulary used in our WebRTC related docs.

There is a large consortium of actors working around WebRTC. With that in mind, TouchDesigner will attempts to not reinvent it in a way that would make it too different from what is already heavily documented. We have wrapped some of the features and flow available in the WebRTC API (native in modern web browsers) as well as the Media Capture and Streams API.

What it means for WebRTC in TouchDesigner: for most of the methods, variable names, callbacks... etc used, it should match the WebRTC API and / or the Media Capture and Streams API.

i.e. onNegotiationNeeded method in the webRTC COMP extension, is an event callback firing when one end of an RTCPeerConnection is requiring re-negotiation. If you go to MDN, you will easily find more details about onNegotiationNeeded with just a copy / paste of the method name.

Signaling is part of the WebRTC discovery and negotiation process.

While we do follow the recommended flows and messaging styles available at MDN and / or Google, including "Perfect Negotiation", there are a few nuances in our signaling process that does not make the WebRTC COMP plug'n'play with other Signaling APIs.

While we plan to add support for Unity and Unreal Engine versions of Signaling in the future (which are both different), advanced users will likely want to just take inspiration from the webRTC COMP and its WebRTCExt and adapt those to their own signaling needs.

i.e. You could run a pre-existing signaling server in NodeJS rather than our signalingServer COMP, and use a protocol different than WebSocket for exchanging messages, such as XMPP.

On the other hand, advanced users could also adapt signaling servers outside of TouchDesigner while still following our own Signaling API.

More details about the Signaling API are available at the following page.

A STUN (Session Traversal Utilities for NAT) is used to discover your public IP address and determine whether or not your NAT is open for this protocol and the required ports.

You can specify a STUN Server in the WebRTC COMP parameters dialog. Note: The default is a public STUN provided by Google. It is highly advised not to use this server in a production context.

A TURN (Traversal Using Relays around NAT) server could help in achieving a reliable connection between two or more peers and bypass NAT restrictions.

You can specify one TURN Server URL and Username / password in the WebRTC COMP parameters dialog. Additional TURN Servers can be added to the WebRTC DAT in the webRTC COMP.

Encryption is a mandatory feature of WebRTC. All components used in the WebRTC context are exchanging encrypted data.

Note that if you are concerned about security, a user should at the very least use a secured WebSocket (wss) connection at the signaling server level as well.

That being said, there are security considerations around WebRTC and its underlying technologies. Advanced users should read the following draft, especially when using WebRTC on a public network: https://datatracker.ietf.org/doc/html/rfc8826

Shortcomings and other considerations

Consider this component a playground, demo and experiment. Note that it is used in conjunction with our signalingClient COMP and signalingServer COMP, fully peer to peer.

Due to the complexity and the variety of applications around WebRTC, it is highly likely that this component could not be used (or at least, not fully) in a production context and environment.

One of the main concerns here would be scalability.

In most cases, you will want to rely on what we often refer to as SFU (Selective Forwarding Unit) or MCU (Multipoint Conferencing Units) to handle large groups of sources. A few names to look into or consider are AntMedia, Jitsi Videobridge, Kurento, Janus.. etc

While we didn't test this specific use case, advanced users could consider running TouchDesigner as an SFU or MCU.

Another important point is that it is likely that you will encounter firewall restrictions and a closed or moderate NAT. Proper STUN (and optionally TURN) server configurations should help with that. We recommend Coturn as a private TURN server.

In the WebRTC COMP viewer, after initializing a connection from a peer to another, click the manage tracks button. 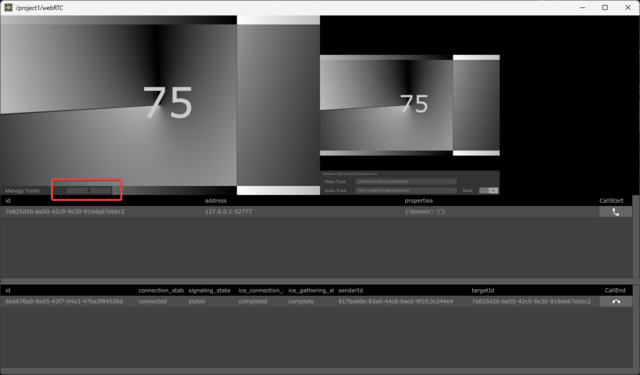 Here, you can see all the current tracks, per connections, of the WebRTC COMP. 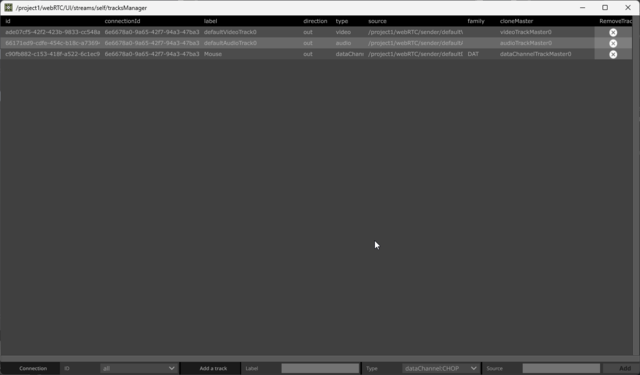 Using the ID dropdown menu at the bottom of the window, you can filter tracks per connection IDs. You can manually delete tracks using the RemoveTrack button in the table.

Finally, using the form at the bottom, you can add tracks of various types. Tip: You can drag an OP of a type matching the Type dropdown to the Source field.

When first initializing a connection from one WebRTC COMP to another, a default dataChannel is set. You can interact with the viewer of the WebRTC COMP with mouse clicks / moves and the position is being sent over a "Mouse" dataChannel. On the receiving end, a circle/pointer is being drawn and composited back into the image.

Additionally, you can go in the track manager (described in the previous section) and add a new dataChannel. Name the dataChannel GenericCHOP (respect spelling, case sensitive) and select its type from the dropdown menu to be dataChannel:CHOP. Last, create a CHOP of 5 channels of 1 sample each, non time-sliced. All those are mandatory as well and important for the example to work, we will describe why later. You can now click Add. 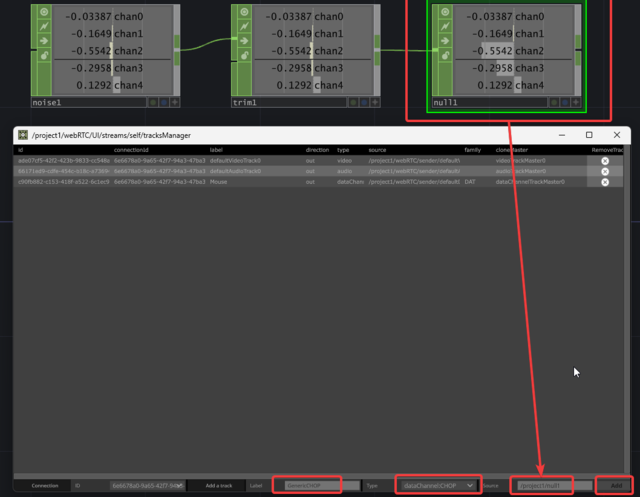 On the receiving end of the connection, add a Select CHOP and enter the following expression:

You are receiving over the connection your CHOP channels. Behind the scene, the sender converted the CHOP channels to a NumPy Array, and converted the NumPy Array to a bytearray to be sent over the dataChannel. The receiver does the conversion back from bytearray, to NumPy Array, to CHOP channels. Because we are sending data that can be totally arbitrary and working with bytearrays over the network, this example is not activated by default and values are hardcoded (to support 5 channels of 1 sample) so that the receiver can convert everything back to the CHOP pipeline.

If you wish to adapt this example, you can edit the Palette:webRTC_Ext extension and add a new method named onDataReceived followed by your channel name. i.e. If we want to add a dataChannel named Animal, the method name would be onDataReceivedAnimal. You can then take inspiration on the onDataReceivedGenericCHOP method and change the shape of the NumPy Array using the NumPy method numpyArray.reshape().

Those signaling messages are following the standards as set and detailed in the Palette:signalingServer Signaling API section. They also have matching JSON Schema files.

A signaling message sent from a client with a WebRTC Offer to another client, and transiting through the signaling server.

A signaling message sent from a client with a WebRTC Answer to another client, and transiting through the signaling server.

A signaling message sent from a client with a WebRTC Ice to another client, and transiting through the signaling server.

The signaling message type property should be set to Ice, and a dictionnary describing a candidate should be set in the sdpCandidate, sdpMLineIndex, sdpMid properties of the content dictionnary.

Signaling Client Signalingclient - The signaling client with which this WebRTC COMP will subscribe to send or receive signaling messages.

File Rotation Filerotation - Number of backup files to be kept when rotating log.

Log Level Loglevel - ⊞ - Filter level of log messages. The selected level is included as well as all levels above. I.e. if Warning is selected, Warning and Error messages will be included while Info messages will be excluded.