Probe is a visual performance monitor for TouchDesigner processes, measuring CPU times (circles), and GPU times (diamonds), plus, via the selector on the left, CPU memory, GPU memory and the number of children in a component.

There are forum posts at https://www.derivative.ca/Forum/viewtopic.php?p=30059

How to Use probe

Drag-drop the probe component from the Palette anywhere in your TouchDesigner process, preferably in /.

Pressing Ctrl-p (it may be Cmd-p on macOS) will display and un-display the probe panel: You will be able to see the probe when you are in Designer Mode as a floating window, or in Perform Mode. In Perform Mode it is a panel embedded in your main UI (to minumize effect of having 2 windows open).

The probe panel looks a bit like your network. For CPU Times, each stack of circles represents the recent time-history of a node. There is one stack for every node in your current network. The color and size of the circles gives the cook time... use the color legend at the bottom left, expressed in milliseconds. 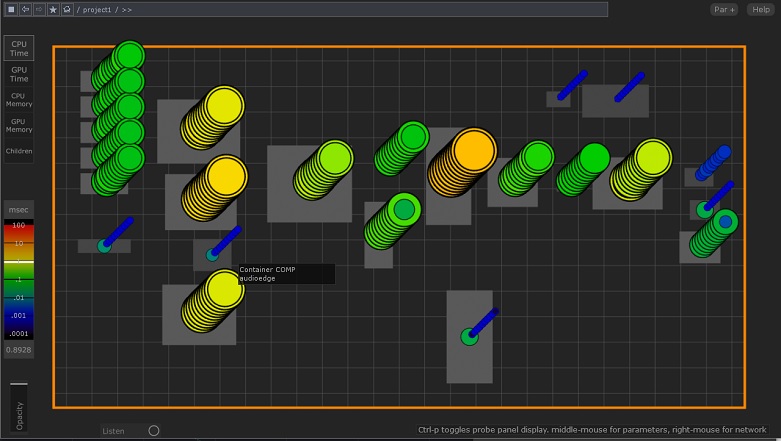 Navigating the networks is a bit different that the Network Editor. by left-clicking on a node's box, if it is a component, will go into that component.. Click on the background to go back up the network hierarchy.

You can use the roller wheel to zoom into a part of a network. But there is no scroll left-right.

The large colored box around all the nodes represents, through its color, the cook time of all the nodes in the network, including all children.

Rolling over a node or stack will show the numeric value of the metric, and in the spectrum graphic on the left (the white line shows the value of the current node's metric, otherwise the parent's value).

The network has a colored bounding box around the nodes. The color of the bounding box represents the total cook time or memory of the component that you are in. Again, refer to the color legend on the left to translate the color into the metric's value.

When you are displaying probe, the buttons at the top right (1) Par+ opens the parameters of probe, where you can, for example, adjust its position in your Perform window, and (2) Help gets this wiki page.

Like in the standard Performance monitor, the OP cooking you see with "CPU TIme" selected is for the CPU times. TOPs and panels are the only OP families that uses GPU, and the cook time you see for them is only the CPU set-up time. (same is true for the Dialogs -> Performance Monitor)

Click on "GPU Time" to get GPU times, etc. Memory is expressed in Megabytes.

This component consumes its own minimal cook time, sometimes up to a few milliseconds, so it will slow your process down a bit when it is being displayed. Undilplaying it (Ctrl-P) stops all cooking of Probe.