NDI is networking protocol that has quickly gained prominance in the video distribution and playback world. This document covers a session of NDI performance testing that occured in Oct 2019 which was conducted at Cocolabs Mexico with Derivative. The goal of the testing was to attempt to uncover maximum throughput of various computers and networking technologies and to address any issues with other networking technologies like the Dante audio protocol.

For working with NDI and Dante over the same network infrastructure see Using Dante with NDI on the Dante page.

The brands of network technologies used in this testing are as follows.

Before embarking on testing network bandwith using NDI it was first important to establish how much a single 10 Gbe switch can be saturated with video data. What is the maximum load possible on the switch using standard benchmarks? Following this real-world test were performed.

For all NICS and switches in the testing platform it was possible completely or very closely saturate the full 10 Gb/s ( 1.25GB/s ). To do this a hard drive that supports over 1.3 GB/s is required for both the sender and receiver.

The following simple test has proven itself reliable and easy to execute. It provides clear statistics and gave consistent results for determining the performance of switch settings and features. Therefore we recommend using CrystalDiskMark with the default settings for comparing your own analysis of your own network and computer hardware performance.

Crystal Disk Mark can be used to test network bandwidth by performing a standard drive test using a shared network location that is on a drive supporting sustained read / write speeds above 1300 MB/s.

In our tests at Derivative, the computer with the fastest drive is the video server testing platform named Galactus. To prepare for running the test CrystalDiskMark was installed on both the server and the secondary network computer which in our case is named Jupiter. The fast drive is shared on the network. All other NICs are disabled on both computers.

Crystal Mark running local on Galactus shows the performance of the D video drive (7 disk SATA Raid 0 array running on a 12Gb/s SAS PCI expansion card). We can see the read/write performance for the first row test is 3633/3217 MB/s which is well above the maximum network switch bandwidth of 10 Gb/s or 1250 MB/s. 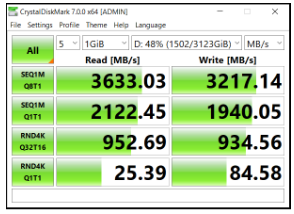 Next the same test is performed on the same drive but running the test on another computer on the same 10G network. Use the Select Folder drop down menu to access a valid network location.

As we can see the network-based benchmark scores much lower across all tests, with the first row test showing a read/write speed of 1185/1025. 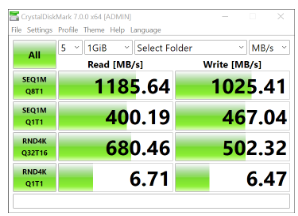 One of the first goals was to ensure the network switch and NIC cards were operating at their greatest capacities. There can be a wide array of factors that might contribute to suboptimal performance from a network switch. With this easy to use network-based benchmark setup, it can be straightforward to test network NIC and switch settings. The next few sections will take you through some important features to keep an eye on when setting up an Audio Video network.

MTU stands for maximum transmission unit, which is the size of the largest protocol data unit (PDU) that can be communicated in a single network layer transaction.

Most managed switches and higher quality NIC cards will support a setting that will increase the MTU such that more data can be sent with less individual packets. This setting is generally referred to as Jumbo Frames or Jumbo Packets. 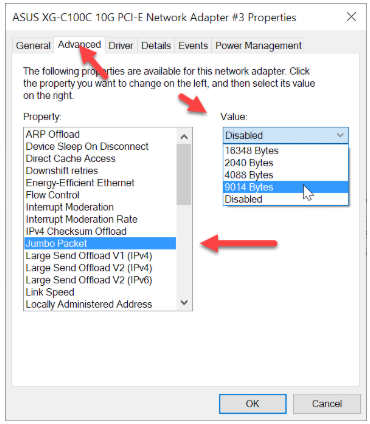 If Jumbo Packets are to be used to increase network performance it is important that all NICs on the same network can work with the specified packet size. As well the maximum size must be supported by the network switch.

A quick search for “Jumbo” in the switch manual for the BS-MP2008 yields the following.

Therefore the maximum setting for the NIC should be 9014 Bytes, while the setting for Jumbo Frames has to be activated using the switch configuration tool. Every switch is different so you will have to consult your switch documentation to explore the configuration options available.

The Buffalo BS-MP2008 switch has a simple configuration panel that can be accessed using a web browser. 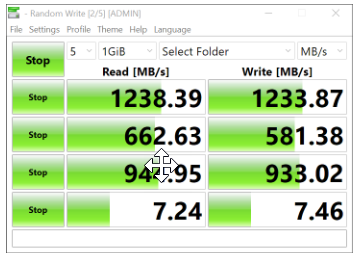 Results are summarized in the following chart. We can see that in our synthetic test Jumbo Frames yields a significant boost in performance.

In addition to the increase in performance, activating Jumbo Frames gets a highest scoring Test1 1MiB(Q=8, T=1) which is much closer to the theoretical maximum for that test which should be around 1250 MB/s or 10,000 Gb/s.

IEEE 802.3az is a networking standard for reducing power consumption during low network activity. The Dante documentation suggests that this setting be disabled in the network switch management panel.

We can see this feature is available for deactivation in the Buffalo switch configuration tool and most managed switches will provide this setting. It will be on by default most likely.

Once this setting has been deactivated we can simply perform another test. The results are summarized in the following chart and we can see the difference is small enough to indicate the setting has an insignificant impact on this kind of test.

This was the most expedient method we found to test, retest, and double check system / network performance against our real-world tests. We encourage others to try the same thing and compare your results with ours.

To date we have conducted NDI 3.8 and NDI 4.1 testing. The testing was quite exhaustive, at times confusing and along the way we have found a variety of issues, some of which have been resolved while others are still outstanding.

When discussing performance we are mainly focused on how the playback is “looking”. We still have no digital metric to measure how many frames we have received or dropped or missed etc. The only way to test was to visually watch the signal on the sender and receiver and judge playback rate by watching for dropped frames using a “White Line Test”.

What is a White Line Test?edit

A “White Line Test” is a method for using human eyes to evaluate playback quality. With a vertical line scanning back and forth - from left to right with linear motion it is easy for the eye to catch even a single frame drop or any other artifact like a horizontal tear from an out of sync scanline. 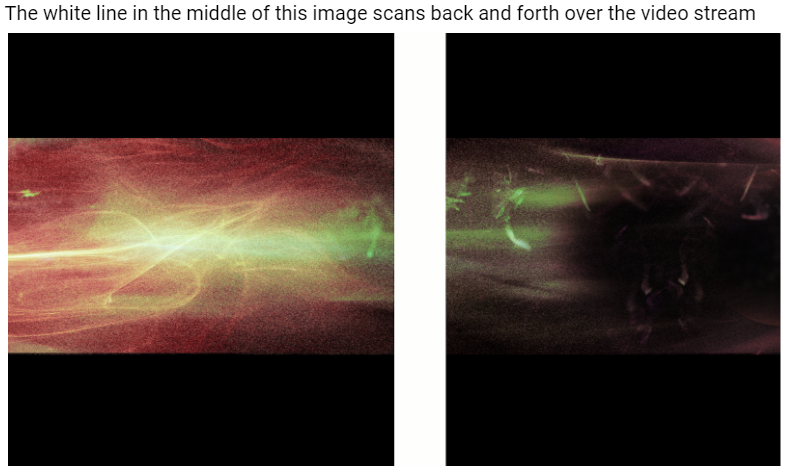 Reading the following charts we can look at the CPU, GPU and Network load for each new stream that is sent. Row 0 starts with the sender running a TouchDesigner file that is streaming a single HAPQ movie off disk and passing through a “White Line Test” component. No NDI stream is active and so this establishes the baseline loads.

The windows task manager is used to measure the maximum CPU / GPU / Network load value over the span of approximately 1 minute. This is completed by watching the graphs of the task manager while also paying attention to the white line playback.

The frame drops values are determined using a best guess based on the tester’s experience looking at video that drops frames. Anything above 1-2 drops every 2 seconds would be considered unacceptable for many cases though certainly acceptable for others. For the sake of clarity we will assume any frequent frame dropping is a failure when compared with a properly configured Displayport or SDI video feed, as the attempt in this test is to achieve flawless playback.

All this testing is performed with a single video file called Flares.mov. This file was selected from a set of 6 videos generated by the Cocolab design team to represent the type of content they will generate for their real-world use cases. This particular video was selected from the 6 because it has the most “noisey” content and therefore possibly the most challenging for the NDI compression engine. It’s worth mentioning here that it is quite easy to completely break the NDI compressor and therefore it’s important to read the “Breaking NDI Compression” section.

Each row is another added stream and as more streams are added we can see how the CPU, GPU and network bandwidth loads up for both the Send and Receive computers. The final red row is where TouchDesigner itself starts to drop frames because the load is more than TouchDesigner can handle.

We can see here NDI 3.8 is generally dropping a frame or two once you go above a single stream. Once you are above 3 streams the frame dropping gets to an unacceptable level. The load on the sender computer is quite minimal as you increase stream count. This is good news for those who want to centralize render power and stream signal to servers dedicated to display / projection.

During the process of writing this paper NDI 4.0 was released and was playing back very poorly, dropping many frames per second even with a single stream. NDI 4.1 has clearly improved with regard to playback quality. We are happy to see this latest release has addressed the issue greatly.

The compression visual quality has also greatly improved from 3.8 to 4.1. Please see the compression quality section for greater detail.

NDI only starts sending data when a connection is made. Adding another receiver NDI TOP In that is connected to the same NDI TOP Out has the same effect on the bandwidth as a receiver connected to a different NDI Out. The bandwidth will essentially double. Adding more receivers adds a small load to the sender computer as well as increasing the sender outbound network by another full stream of bandwidth.

HAPQ generally looks much better than NDI, but it takes up a lot more bandwidth. For the compression test cases filed a single stream of 3840x2160 @60Hz takes 260 Mb/s of bandwidth using NDI while HAPQ requires roughly 6 times more at 1.8 Gb/s. 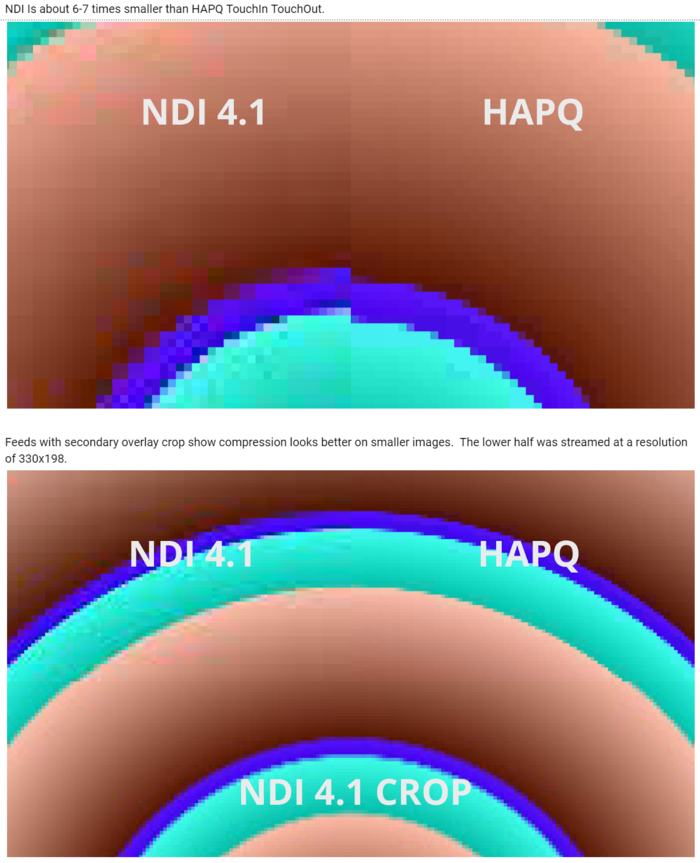 On our testing platforms NDI seems to naturally sit around 10 frames behind TouchIn/Out. So there is greater latency with NDI over TouchIn and TouchOut

NDI Does Not Work Well With Some Contentedit

As with any compression code beware that is can be fairly easy in TouchDesigner to create content that doesn't compress well. Things like particles, pixel shaders and things that have a lot of noise will not always compress well when compared with things like live action. The testing process was focused around a single piece of content - which was the Flares.mov file. NDI performance varies wildly depending on what kind of content is thrown at it. Included in the AV testing kit are a range of signals that can cause or atleast has caused NDI to fail - resulting in an increase in dropped frames or other artifacts like a solid green output. You should familiarize yourself with these cases and be wary of content that might push NDI into these performance bottlenecks.

Do Jumbo Frames Matter for NDI?edit

We saw no indication that having Jumbo frames either on or off made any difference in our visual playback analysis. Therefore we have no recommendation either way.