This is a sub-page of the TouchMixer (Mixxa2015) main page.

Solid black image with alpha = 1, at the standard resolution defined in the Setup dialog.

The blend effect is determined by clicking the blend type name at the bottom, which brings up a new "blend type" window. Select one of 35 blend types. Rolling over a blend name lets you preview the effect without changing the output of the cell.

Tip: This blend effect is built into many of the other effect types, which allows for the effect type to be mixed with its un-modified input.

Some blend types are:

Cell Fetch - Get the Output of Any Celledit

This is how you get image streams from other Matrixes. Gets the output of any cell given the matrix, column and row of a cell.

Zoom and rotate camera in any direction as you fly-through clouds.

Color Push - push color out of an imageedit

Color Push can help so your audience doesn’t need to be treated for Color Overload. Or you can treat them WITH more Color Overload. Depending on the subtle-ness of your style, you can reduce the color palette here by reducing the hue range of your image. 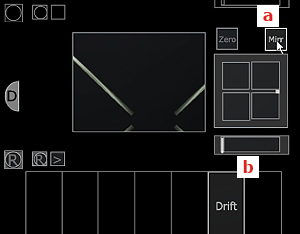 Drift takes its input and continuously slide and repeat the image. Zero resets the motion. You can mirror (19a) the image, and like in Zoom, soften the edges for seamless repeating (19b).

Edge can add transparency and a colored edge line. Click/drag on the image (16a) to blend the edge effect with the original image. The slider (16b) sets a contrast threshold. (16c) makes the edge wider. The edge color is set on the right (17a). 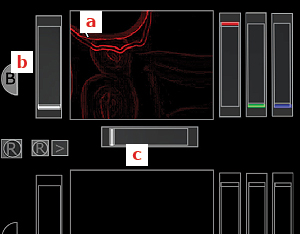 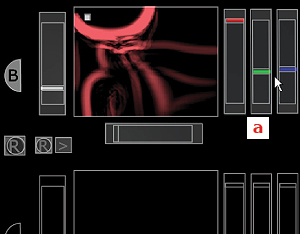 Use 4 points to crop an image.

Feather - soften edges of an imageedit 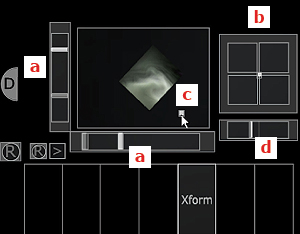 Feedback - mix and transform image from another celledit

Feedback was added to keep Jim Ellis off the street. It feeds another cell of the matrix, often the last cell of the column, back into itself.

The left column chooses the source of the feedback (which is delayed a frame). You can use the outputs of itself (me) or one of the columns 1 to 9. Then by clicking on the preview image of Feedback (20a), you blend the incoming image with the feedback image. Other sliders control zoom (21a) (21b), rotate (21c) and translate (21d). Hit R to reset it all. 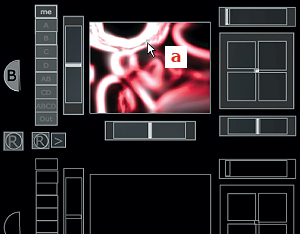 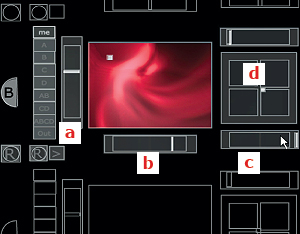 A bunch of arbitrary effects combined to fake film.

This is barely a paint system. You can draw some paint strokes. Click-drag your finger/mouse around the inner window. Designed for drunk VJs to harass his/her crowd with stream-of-consciousness or public service announcements. 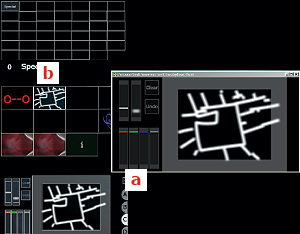 Low-high luminance keyer followed by a brightness fader. Almost same as Luma Key but it has a fine-control on the brightness for low-level adjustments.

The fader (29a) dims the background image, (29b) dims or boosts the projected image and lets you fade to black while you prepare your next assault and your audience adjusts its eyes to a black screen. (29c) adjust black level of the output. (29d) adjust gamma of the video. Use its reset (R) button to get back to normal. 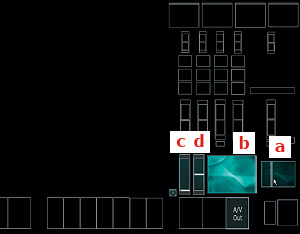 Matte - use a grey-scale image to mix two imagesedit 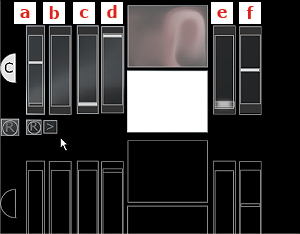 The first slider (15a) is monochrome, the second is (15b) is black level. Move the slider below 0 to add white.

(15c) and (15d) give a luminance key, where you set the lower and upper luminance range (generating a matte (“alpha”) as well) that is passed to the next stage. You see previews of both RGB and alpha.

This is the most important effect, which brings movies from the bins into the matrix. See TouchMixer (Mixxa2015)#Movie Play effect.

You can receive video from another TouchDesigner process with a Net Stream effect type. Give it the name or IP address of the remote computer, and make sure you can reach the other computer using Windows networking, in both directions. Use the port number of 9000 for linking 2 computers 2-way. Use 9000, 9001 and 9002 if you want bi-directional traffic on 3 computers.

To output the video stream to another Mixxa, go to Setup and click on “output port 9000”.

Historic: You can also take a video stream from TouchMixer 017 on another computer, running over Gigabit Ethernet over port 9000 or 9001. On your computer running Touch 017, first set the environment variable VTOUCHOUT to “1 512 256 4 3 30”, which sets it up to output a stream at 512x256 (res from TouchMixer has to be powers of 2), aspect ratio 4x3 and attempting to run at 30 frames per second. 1 at the start means on, 0 means off. That’s via right-click on My Computer -> Properties -> Advanced Settings ->

A pass-through or place-holder.

Don't bother with this. Luma Key or Key Fade is enough.

Samples circular chunks of the input image and places them randomly scaled, moved and rotated. There is size, spread and softening control.

( Expert: Sample (12a) (sample-and-loop) is used to capture in memory the video stream passing through it, letting you loop a captured sample that is up to about 3 seconds. It lets you capture, loop, delay or time-blur the video going through it.) 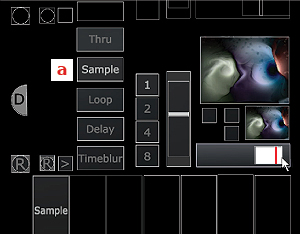 ( Expert: Thru just passes the video through, unchanged. Delay delays the input by up to 64 frames (actual time depends on your frames per second). Timeblur smears video over time, up to 40 images (Warning: It can be slow). Using Sample and Loop, you can capture a short loop from a source like a video camera. Caution: These can take a lot of graphics card RAM.)

( Expert: Sample grabs the most recent 40 images of the video while still passing the source through. When you press Loop, it loops some part of that 40 images. You select the end of the loop by pressing on the horizontal slider with the red time bar. You can select how fast it plays via the slider to the left of the preview window. And you can select how many beats it loops to by pressing 1, 2, 4 or 8. When you use Sample, Delay or Timeblur, it can be a bit of a graphics memory hog (xres * yres * 4 * 40 = bytes of graphics RAM).

Put in some keywords and a search is made for images tagged similarly. Pick one and combine it with the incoming image.

Still Cut - crop a high-res image and navigate around itedit

Still Cut is a very powerful hi-res image cropper, with random drifts over the image.

It reads the image from disk at its native resolution, then crops out a part at the compositing resolution of Mixxa. (See Setup. This preserves the detail as much as possible and allows zooming into sections of the image.)

Then you can manually/randomly make the rectangle drift over the original image.

Assign the image for Still Cut via the bins as you would with the Movie Play effect.

The controls can be lagged with the last slider.

SUPER-TIP: Make the crop window randomly drift and turn via the sliders on the right. The heading slider will may the crop rectangle to turn in the direction the rectangle is going.

The source image can just as well be a movie.

Stoner - Warp Images with a Mesh of Control Pointsedit

Stoner is useful for fitting rectangular images onto curves surfaces in projections, or generally warping an image. It starts as a 3x3 grid of points and subdivides 4x between control points. You can add rows and columns up to a grid of 9x9, and within each pair of rows or columns, subdivide up to 32.

This is a strange single-character generator that uses the Symbol font to generate close-ups of simple shapes.

Frames of video are time-re-ordered.

This is video from cameras, video devices, webcam - devices supported through Direct Show and Image Source.

Select a camera number (33a) or click on the image (33b) if the camera plugged into your computer isn’t visible here. One camera is the default, but you can add more by right-click -> Duplicate on the bin button for the camera. You can unplug cameras and plug them back in and they get picked up, without a pause. 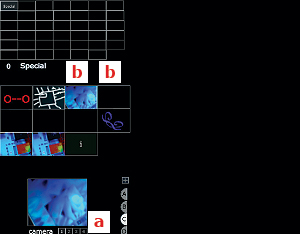 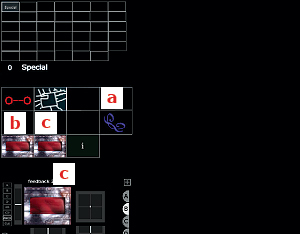 Click on one of the text (32a) in the preparation window (not the movie icon), type text, press backspace or Delete. Sliders adjust size and color. You can set background color. Delete the text to get a simple color slate. Enter \n to add a newline.

The incoming image is mapped on some 3D shapes with simple camera controls.

Each layer feeds through Zoom. The first slider of Zoom (13a) sets the Zoom amount. Then if you press on the preview image, it scrolls the image and sets the center point for rotations of the image. (13b) sets its rotation. (13c) repeats the image horizontally and vertically. Mirr (14a) gives a mirrored kaleidoscope look.

( Expert: (14b) sets an edge softness for seamless repeats. (14c) sets the lag time of your zooms, pans and rotates, and you can drag this slider off-scale to give you long sweeps when you operate Zoom’s other controls.) 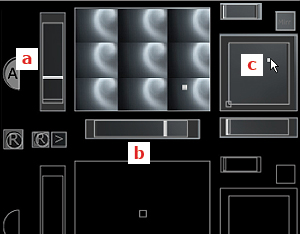 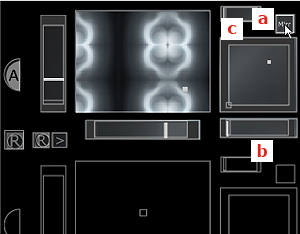