The Metaball SOP creates metaballs and meta-superquadric surfaces. Metaballs can be thought of as spherical force fields whose surface is an implicit function defined at any point where the density of the force field equals a certain threshold. Because the density of the force field can be increased by the proximity of other metaball force fields, metaballs have the unique property that they change their shape to adapt and fuse with surrounding metaballs. This makes them very effective for modeling organic surfaces. For example, below we have a metaball. The surface of the metaball exists whenever the density of the metaball's field reaches a certain threshold:

When two or more metaball force fields are combined, as in the illustration below, the resulting density of the force fields is added, and the surface extends to include that area where the force fields intersect and create density values with a value of one. For more information on metaballs, see Metaballs. 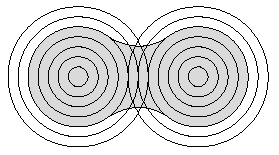 Level of Detail for Metaball Display

Modify Bounds modifybounds - Available only when an input is connected to the Metaball SOP to set bounds for the metaball. When Modify Bounds = On the transform parameters below will further modify the position and radius of the bounds.

Radius rad - ⊞ - Controls the radius of the metaball field.

Weight metaweight - Defines the weight of the Metaball iso-surface within metaball field. An increase in weight makes the density of the metaball greater, and thus the defined implicit surface of it and surrounding metaballs will be enlarged.

Kernel Function kernel - There are four different metaball interpretations: Wyvill, Elendt, Blinn and Links. See the Geometry articles for illustrations of the differences between these.

What is an Exponent?

Extra Information for the Metaball SOP can be accessed via an Info CHOP.