Through the right-click menu you can get at viewing options like wireframe (w) and the Display Options (d) like point numbers, normals, grids, axes and more. You can also change your navigation modes.

The geometry viewer has 4 Camera Navigation Modes selectable from the right-click menu in the viewer. For the first 3 modes the camera dolly always moves towards the cursor position, each of these modes differ in the the way they set a pivot. The pivot determines the point in 3D space that the camera tumbles (rotates) around as well as the speed of camera movement i.e. if the pivot point is far away, the camera will move further for each movement of the mouse. The last mode, Camera Mode, moves and pivots from the perspective of the camera and is more similar to the movement possible using a real-world camera (ie pan, tilt, dolly, track, crane), or in a game engine such as Unreal.

This standard control scheme always uses the center of the view for the pivot for tumble. Dolly will always move in and out towards the position of the cursor.

The pivot is the center of all geometry in the viewer, or just the selected geometry if the viewer supports selection (see Geometry Pane). If no geometry is present, the origin 0,0,0 is used as the pivot.

The controls are from the perspective of the camera and the pivot is the camera's position. This is most like camera moves that are possible with a real-world camera, or in a first-person game engine such as Unreal.

The camera in the geometry viewer can also be controlled using a 3DConnexion SpaceMouse. The SpaceMouse supports full 3D movement in 6 axes (XYZ Translation and XYZ Rotation) and works independently of the mouse cursor. The Geometry viewer supports 3 different navigation modes for the SpaceMouse that are independent from the regular mouse-driven navigation modes. The mode can be selected by right-clicking on the active viewer and choosing a mode from the menu.

Right-click on the viewer and select Display Options. (You must be in View state if using the Geometry Viewer in a pane.) 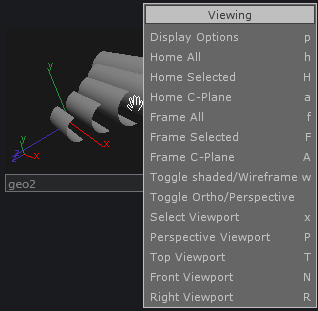 Node Viewers of 3D object type Components and SOPs are also geometry viewers. These geometry viewers do not include all the toolbars of a Geometry Viewer in a pane, however you can access many viewer options using the right-click menu over the viewer while in Viewer Active mode.

Any Pane can be set to Geometry Viewer using the pane type menu or by using the shortcut alt+3. 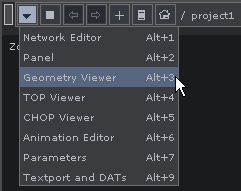 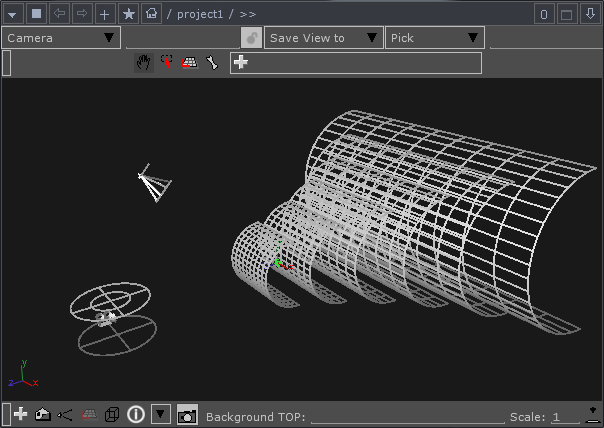 The Geometry Viewer state bar lets you switch viewer states. Click one of the buttons to switch states, or hold down the state's keyboard shortcut for temporarily switching states. For example, if working in View state, you can temporarily go into Select & Transform state by holding down the "s" key. While holding "s" key, select or transform some geometry, then release the key and you will be back in View state.