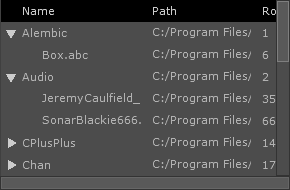 The treeLister custom Component provides a powerful and easy way to make tree controls for displaying hierarchical data. It is derived from the lister custom component, so many of its features are documented in that Component's wiki pages. Note: many of treeLister's features require a basic knowledge of Python.

You can find treeLister in the Palette under the folder Derivative>UI. Drag and drop the component from the Palette into your network.

There are three main ways to input data into a treeLister. They correspond to the options in the Input Mode parameter. Be sure the appropriate option is selected there when using the following methods...

This method is useful for data objects that already have a hierarchical structure, such as file directories and TouchDesigner networks. To use callbacks to dynamically generate tree data, you must:

For this method, wire a DAT containing a valid JSON text object into the treeLister's input. The JSON object will be represented in tree form.

The row objects that are automatically created from JSON have the following members:

For this method, wire a table DAT with column headers and a "path" column into the treeLister's input. The path should be unique for every row of the table. If necessary, set the Path Separator parameter. Example DATs for use with this method: OP Find DAT and Folder DAT.

For this method, wire a table DAT with column headers and "path", "wirepath", and "parentpath" columns into the treeLister's input. This is for use with the OP Find DAT to create tree data from TouchDesigner networks that include grey wired hierarchies.

To verify your data and get the basics of your tree set up, turn on the Autodefine Columns parameter on the Lister page.

Ultimately you will probably want to create your own column definitions for a tree lister. For information about that, see Lister Custom COMP: colDefine table. For full tutorials, see: Lister Custom COMP Examples. Note: you should always keep the first two columns for indent and expander button. The third column should be stretchy to absorb each row's indent.

Basic treeLister functionality is set up with parameters.

Collapse All Collapseall - Collapse all branches of the tree.

Input Mode Inputmode - Select the mode for the Component's input.

Path Separator Pathseparator - The separator used in the "path" column for the Table with "path" col input mode.

Use Default Roots Usedefaultroots - If True, use the tops of provided data structure as the roots.

Roots Roots - A Python list of tree ID's to be used as the root objects in the tree.

Show Roots Showroots - If off, the tree will start at the defined roots, but will start displaying at the roots' children. For example, this can be used to show every file in a folder without displaying a node for the folder itself.

Click Corner To Refresh Clickcornertorefresh - When on, treeLister will display a refresh button in the top-left of the tree. This is useful for manually refreshing data that has changed.

The internal config Comp is where columns, colors, and other set-up is defined. All the features of Lister's Config Comp are available. Only the changes and additions will be described here.

TreeLister has two required columns: Indent and Expando. These are set up for you in the default treeLister, and you will generally not have to change them. The Indent column is the empty space before a row, and the Expando column contains the button to expand and collapse tree branches. In the column definition textFormat row is the characters used for open and closed branches.

The third column should be set to stretch to absorb each row's indent. Tip: the width entry sets the minimum width for stretchable columns, so set that to a number large enough to display your tree labels.

When treeLister is using Table with "path" col Input Mode, sourceData refers to the column label in the input table. In this mode, the special sourceData entry __row__ will also be available to display the source row of the input table. Tip: "__row__" is also available as a key in the row object of each lister Data row.

The define table holds extra definitions for a lister. The treeLister adds:

The various textCOMPs (older version use textTOPs) define the attributes for the table, rows, columns, and cells in various states. The treeLister adds a few of these, most important of which are the expando* textCOMPs. These define the way the expando button looks in the treeLister. The characters used in expando are found in the colDefine table, textFormat row. There is also an indent textCOMP defining how the indent area looks. In general there is no need to change these OPs.

Custom callbacks facilitate complex Python tasks within the treeLister. Callbacks always take a single argument, an info dictionary of values relevant to the callback. Print this dictionary to see what is being passed. The keys will explain what each item is.

All the callbacks from lister are available in treeLister.

In addition, the following are new callbacks added to treeLister:

The TreeListerExt extension provides extended functionality for working with treeLister. Frequently used promoted members and methods are listed here. A full list can be found using the Python help() function.

Note: The TreeListerExt class uses ownerComp in an unusual way, to refer to its internal Lister custom Component. The treeLister itself is stored in its treeListerComp member.

OpenToPath(path, doRefresh=True) → True if successful, root opened in if already open, otherwise None.

Open tree to the provided path. Only works in "path" col modes.

FromPathGetRowNum(path, startRow) → Row number or None if row object is not currently visible.

Only works in "path" col modes.

Select the rows with the provided paths. Tree will be expanded to selected paths. Only works in "path" col modes. Any paths not found will be ignored.

Create a JSON compatible Python object from tree data, starting at the given roots. Note: this only works in JSON Input Mode.

Create JSON text from tree data, starting at the given roots. Note: this only works in JSON Input Mode.