See also Category:Components for a full list of articles related to Components.

Components (or COMPs) are unique compared to other operator families in that they contain their own networks. To make a new network in your project, create a new Component using the OP Create Menu and select from the COMP tab. Then go inside your new component and start building your network. Component networks can contain operators and/or additional sub-networks (additional components). Sub-networks create a hierarchy of networks that can be navigated (using the network path) and forms the overall hierarchical structure of .toe/.tox files. 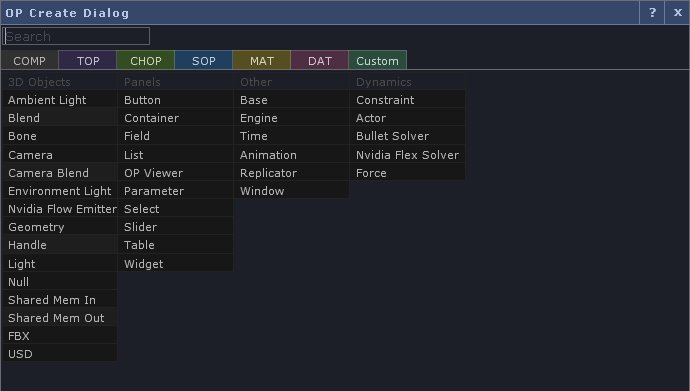 There are two special sub-Families of components: Object Components and Panel Components, as well as numerous other components. These are listed in four separate columns in the OP Create Menu.

Object components can be parented in a hierarchy by connecting them together vertically (using their connectors on the top and bottom of the nodes).

Panel components can be parented in a hierarchy by connecting them together vertically (using their connectors on the top and bottom of the nodes).

Components can have operator inputs and outputs on the left/right sides of the node if their network contains In and/or Out operators (of most types: TOP, CHOP, SOP, DAT. e.g. In TOP and Out CHOP).

A noise component has been constructed to take a TOP, CHOP, and SOP input, apply noise to each one, then output the results. The component's internal network looks like this: 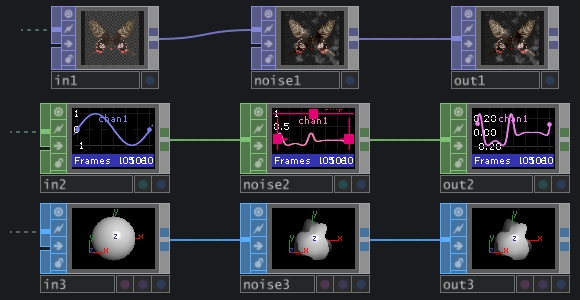 The image below shows how the inputs and outputs of the Component can be connected into a network. 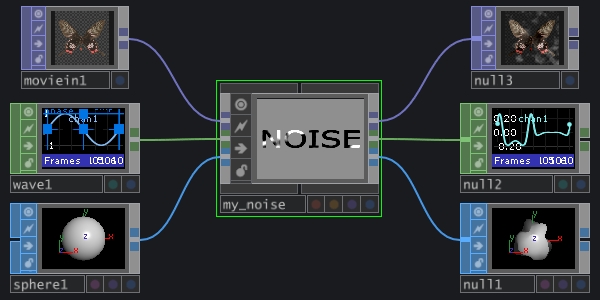 Components have the 4 common Flags along their left side: the Viewer Flag, the Clone Immune Flag, the Cooking Flag, and the Lock Flag. Object Components also have a Bypass Flag and an additional 3 flags in their lower right corner: the Pickable Flag (orange), the Render Flag (purple), and the Display Flag (blue).

You can save out a Component into a .tox file with a RMB -> Save Component on the node. This is handy for sharing networks with other TouchDesigner users and projects. Any commonly-used tool or network you create in TouchDesigner is good candidate for a Component.