Note: Only available in TouchDesigner Pro.

The BlackTrax CHOP works in conjunction with the BlackTrax system. BlackTrax tracks up to 85 BlackTrax Beacons and sends data regarding their position, rotation, velocity, and acceleration to TouchDesigner inside RTTrPM Packets. Each Beacon can have up to 3 LEDs attached, which can also be independently tracked in TouchDesigner. Each Beacon will have an ID that is specified in BlackTrax software and that Beacon ID must be mapped correctly to CHOP channels in TouchDesigner using the Mapping Table. Alternatively if the IDs are incremental then the "From Max Beacons" option in "Output Format" can be used.

The server software should be set to send data in the WYSIWYG coordinate system (which should be the default). Rotations should be sent in Euler angles, not Quaternions. TouchDesigner should support both endian settings, but it's best to leave those as their default values.

Active active - While on, the CHOP receives information sent to the network port. While Off, no updating occurs.

Port port - The port that will accept packets.

Protocol protocol - ⊞ - The network protocol to use. Refer to the Network Protocols article for more information.

Network Address netaddress - When using Multicast, this is the address that will listen for packets.

Sample Rate samplerate - Sets the sample rate of this CHOP.

Output Format outputformat - ⊞ - Specifies the format for the CHOP channels (ie. how many beacons to add). "From Mapping Table" adds one beacon to the CHOP for every row in the mapping table. "From Max Beacons" adds the number specified in the "Max Beacons" parameter.

Max Beacons maxbeacons - Specifies how many beacons to add to the CHOP. Used with the "From Max Beacons" output format.

LEDs leds - When enabled, adds position channels for each LED in the beacon.

Reset Channels reset - Clears any stored beacons and removes any stale data while On. 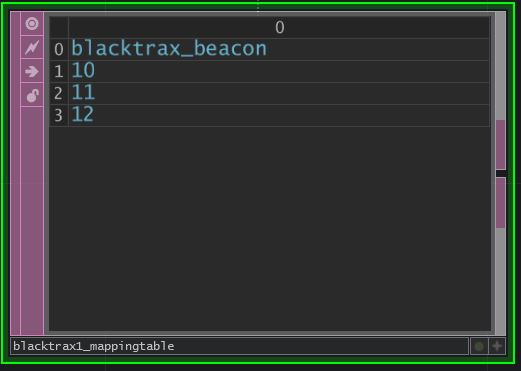 Extra Information for the BlackTrax CHOP can be accessed via an Info CHOP.